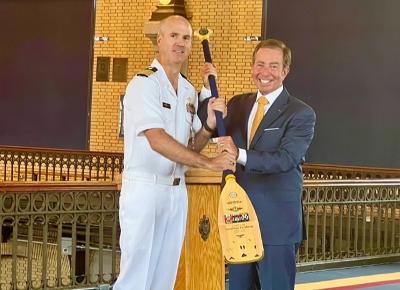 30 Jul THE LIFESAVING VALUE OF A STRONG DOCTOR-PATIENT RELATIONSHIP

I have a rule of thumb … If you save my life, I will always accept the invitation to speak at your military ceremony.

I did just that yesterday, at the retirement of the inspirational Navy Captain, MD, PhD, Orthopedic Oncologist, and head of the Department of Defense’s Osseointegration Program, Dr. Jonathan Forsberg.

The ever-humble Dr. Forsberg is reluctant to admit that he saved my life when I was on the ropes with a Stage IV Bone Marrow Cancer (Multiple Myeloma – MM) diagnosis and facing osteosarcoma surgeries and a Stem Cell Transplant in 2015. But at a minimum, he will admit to saving my right leg. And I will always have with me a 10” piece of titanium he implanted on my right femur – a souvenir of his skill as a surgeon, and reminder that great Orthopedic Surgeons are akin to skilled carpenters with medical degrees.

Dr. Forsberg comes from Whitefish, Montana. “Big Sky” Country.  “Big” was a word I emphasized throughout my remarks as the ceremony’s Presiding Officer.

To start, I had a BIG deficit in the understanding of medicine and cancer up to age 53, when I found my way to Dr. Forsberg’s care as a Navy Rear Admiral, then Director for Intelligence (J2) on the Joint Chiefs of Staff. I never had family members or close friends who endured cancer’s travails. My view of medicine up to that point – as a healthy former athlete – was Tylenol, Motrin, heat an ice and chicken soup.

I’ll never forget in a group meeting with our medical team as we were planning the way ahead in the earliest days of diagnosis and treatment, that Dr. Forsberg brought ortho tools and models and spoke plainly to me about Plan A, B, and the dreaded plan C. Between that meeting, and subsequent surgeries and procedures the rest of the year, Dr. Forsberg established BIG trust with me, and my caregiver, advocate and wife, Kim. Here’s how:

For a new cancer patient, even a career Intel Officer accustomed to collecting and analyzing large amounts of information and making sense of it in order to measure risk, the information necessary to make life changing decisions in a medical crisis can be overwhelming. One needs a physician who can add context and perspective, then tee up options for the best plan of attack. That’s what I, and thousands of other patients found in Dr. Forsberg over the past 20+ years.

He is not only supremely gifted in the Operating Room, he is similarly gifted at establishing strong Doctor-Patient relationships. And “A strong Doctor-Patient relationship …”  as the late Dr. William Osler – considered the founding father of modern medicine and one of the founding Professors of Johns Hopkins Hospital, emphasized, ” … is the BIGgest part healthcare.”

When the outcome was uncertain and I was presented with a late stage cancer diagnosis, as a military officer who served in peace, crisis and combat, my instinct was to look for this cancer’s flank, a weak spot that could be attacked and exploited with the right strategy, operations and tactics.

I was also looking for hope, and wanted a Doctor who would provide it up front. That was Dr. Forsberg. He emphasized that my strengths; overall health, age, tumor locations, and mental outlook all released me from over-emphasis on the lagging indicators of historic MM statistics. This perspective became the foundation of my will to fight and turn the tide of this battle.  Dr. Forsberg was a prior enlisted Marine Infantryman and as a Lieutenant Commander was a combat surgeon in Iraq … I was blessed to have him by my side going into this fight … he helped turn my anxiety into resolve!

So just how did someone like Dr. Forsberg add that context and perspective and establish that relationship? One way, was his empathy as a physician and a kind, caring human being. Not just empathy in the classic sense of understanding a patient’s feelings, but understanding the patient’s thought processes, decision making strategies and attention span. In short, what was important to them. For example, sensing that Kim and I best absorbed information verbally and graphically, and that I did a lot of study at home, he would frequently prepare take-home diagrams for us to use as a research base for subsequent meetings. I still keep several of the most significant diagrams in my medical file at home as souvenirs.  Dr. Forsberg helped me understand not only what to do, but why it needed to be done. He motivated Kim and I to become involved in the decision making process, encouraged us to be our own advocates, seek second opinions, challenge conventional wisdom and obtain cutting edge standards of care.

Over the years, Dr. Forsberg has delivered some very BIG presentations to some very BIG audiences, and that’s really left a very BIG mark on the Ortho-Oncology and Osseo-Integration community. But it’s his genuine caring approach and gifts with building very important Doctor-Patient relationships that those he saved will remember the very most.   And the blessing of that type of Doctor-Patient relationship … well, that is as BIG as the sky of Montana itself.

Fair winds and following seas, Dr. Forsberg.  You are an exemplar of “Teamwork, Tone, Tenacity™” (T3), my highest leadership compliment!

– Rear Admiral Paul Becker, USN (Ret) is a motivational keynote speaker for Medical Providers and Patients. He is a leadership professor at the U.S. Naval Academy and the CEO of The Becker T3 Group. In 2016, The Naval Intelligence Community established “The Rear Admiral Becker ‘Teamwork, Tone, Tenacity’ Award for Leadership” in his honor. To connect with Paul, visit his website: https://TheBeckerT3Group.com