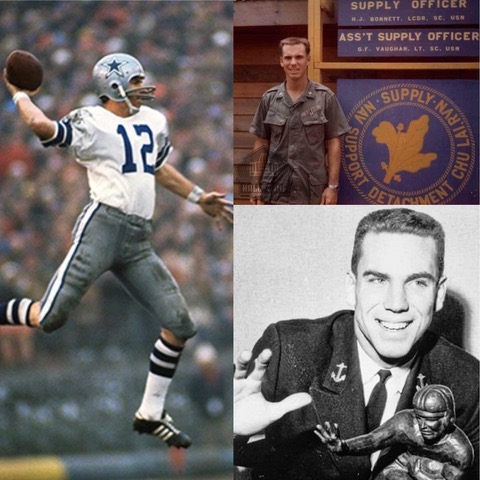 During this Super Bowl LV week, one of the NFL’s all-time great champions celebrated his 79th birthday: Roger Staubach.  “Roger The Dodger” was a role model leader in every way, demonstrating “Teamwork, Tone, Tenacity” on and off the field.  He was a two-time Super Bowl Champ during 11 years as the Dallas Cowboys’ quarterback from 1969-1980, a Super Bowl MVP, the Heisman Trophy winner in 1963 as a Midshipman at the U.S Naval Academy (the last Service Academy player to win the Heisman), a Naval Officer who served in Vietnam and a successful entrepreneur and businessman following his athletic career.  Roger’s three pillars of success as leader emphasized:

Roger was also nicknamed “Captain America” and “Captain Comeback,” amazing compliments for such a motivational leader. When asked about his greatest memories as a football player, the Hall of Famer with dozens of trophies, honors and championships often describes meeting President John F. Kennedy at the 1962 Army-Navy Game (in which Staubach led Navy to an upset victory) and then mourning for President Kennedy at the 1963 Army-Navy Game just days after the President’s assassination.  I’ve had the pleasure to meet Roger several times over the years at Navy football games or Naval Academy alumni events.  When asked to discuss leadership lessons for a new generation of Naval leaders he always obliges.  Afterwards he’s quick to offer, “I’d rather tell you stories about my children, grandchildren, and now great-grandchildren!”  He really does live out his principles about giving a darn about someone other than himself.  As a testament to his selfless leadership and status as an American sports icon, Roger Staubach was awarded the Presidential Medal of Freedom in 2018, one of only two NFL players to ever receive this honor.