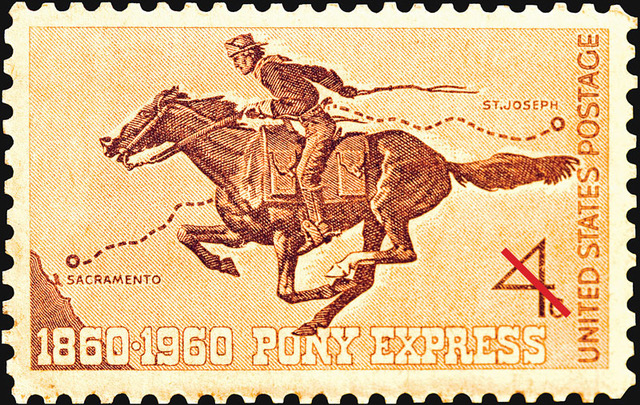 I most often write about individuals’ leadership traits that inspire others and lead to success.  It’s easy to associate valor and accomplishment with a single person. But occasionally an event or an entire organization takes on iconic significance. Those events’ images and memories motivate and remind us of collective triumphs.   That is the case here.

On This Date in 1860, the first Pony Express service began moving mail from Missouri to California (at $5 per ounce).  It covered 1900 miles in an amazing 10 DAYS!  It was an innovative way to overcome an incredibly difficult obstacle.  The Pony Express lasted only 18 months until the transcontinental telegraph made it obsolete; however, it is now part of the enduring lore of the American West and epitomized T3:

In the final years before electronic communications became commonplace, the Pony Express bridged the communications gap between America’s East and West.  As a young stamp collector I also marveled that the first postage stamp in our nation’s history to feature an image other than Washington, Jefferson, Franklin and Jackson was of the Pony Express (1869).  When I reference the Pony Express in keynote speeches to large audiences or corporate teams, I’m also always certain to emphasize that they never lost a letter!  It wan’t just another remarkable enterprise in American history, it was a testament to the coordination, understanding of common purpose, optimism and indomitable spirit of the Pony Express’ founders and participants.  In short, the epitome of “T3!”