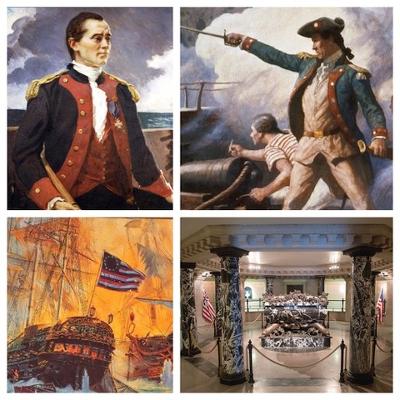 Happy Birthday (1747) John Paul Jones, America’s first inspirational maritime hero. Jones established the standard of courage and professionalism that defines our Navy today.  The Scottish born Jones’ aggressive actions against the British in their home waters influenced a new nation and sent a message to the world that the American Navy was a new force to be reckoned with.  There’s rarely a keynote address when I don’t reference some aspect of Jones’ remarkable leadership style:

Jones died in France 1792.  President Theodore Roosevelt had his  remains returned to the U.S. in 1906 with national ceremony.  His remains now lay at eternal rest in a marble sarcophagus at the U.S. Naval Academy Chapel, one of the most visited tourist sites in the State of Maryland, where his memory and audacious spirit of action and leadership inspires new generations of Americans.

– Rear Admiral Paul Becker, USN (Ret) is a leadership expert.  He is the CEO of The Becker T3 Group, a platform for his motivational and national security keynote speaking. A former Naval Intelligence Officer, he’s successfully led large, diverse, high-performing teams afloat and ashore in peace, crisis and combat.  In 2016, The Naval Intelligence Community established “The Rear Admiral Becker ‘Teamwork, Tone, Tenacity Award for Leadership” in his honor