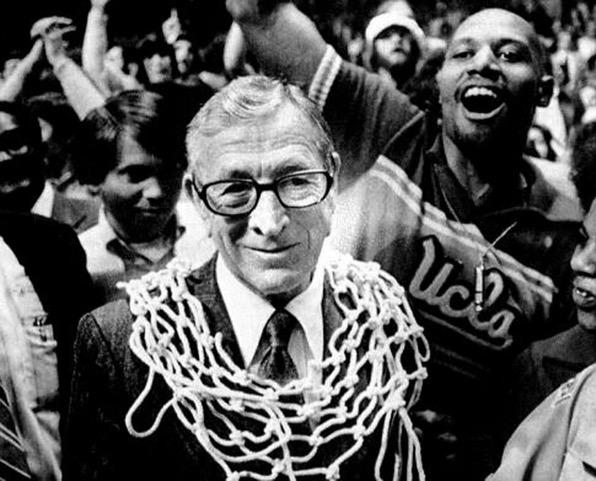 It’s March Madness!  The 2019 NCAA Men’s College Basketball “Sweet 16” tips off this week.  The nation is excited about watching great games being played by great teams with great coaches.  The most prominent coach still in the tournament is Duke’s Mike Krzyzewiski with 5 national championships under his belt.  The inspirational “Coach K” is rightly considered the greatest leader of young athletes on the court today.  But which NCAA basketball coach led his teams to more championships – 10! – than any other?  UCLA’s John Wooden, “The Wizard of Westwood,” from 1948-1975.  Coach Wooden’s ability to motivate, build character and elicit extraordinary performance is legend.  His humble, inspirational leadership style contained three core elements: “Teamwork, Tone, Tenacity.”

John Wooden was raised on a dairy farm in Indiana.  He was a three time All American as a 5’10’’ Guard at Purdue who led the Boilermakers to the 1932 NCAA Championship as their Senior Captain.  He was a high school teacher and basketball coach in Indiana until World War II when he served as a Navy Lieutenant.  In 1948 he was hired at UCLA, where the Bruins had only three winning seasons over the previous two decades.  In his first season as UCLA coach, the Bruins had a 22-7 record and won their Division!  The wins continued and so did national attention on Coach Wooden’s leadership style.  Following his retirement from UCLA, he was a keynote speaker who attracted sell out crowds when he spoke about motivation and leadership.  He authored or co-authored numerous best selling books about his coaching principles which apply to all aspects of life today.  I have two of them in my office, A Lifetime of  Observations and Reflections On And Off The Court, and Wooden on Leadership.  Both are earmarked and highlighted to quickly reference his pertinent thoughts about developing teams, building character and improving performance.  Here are some of Coach Wooden’s thoughts on the pillars of “T3” that are applicable to leaders and teams today:

Coach Wooden’s success in building high performance teams was based on simple precepts that were explicitly known and repeatedly emphasized.  Through the application of the principles of “Teamwork, Tone, Tenacity” his basketball players bought into a common purpose.  Wooden coached his players to be persons of character who were focused on competitive greatness and not just Wins v. Losses.  He described success as “The self-satisfaction in knowing you made the effort to do your best to become the best you can.”  These are leadership – and life –  lessons that transcend sports and contribute to Coach Wooden’s reputation as the Greatest NCAA Basketball Coach of All Time.