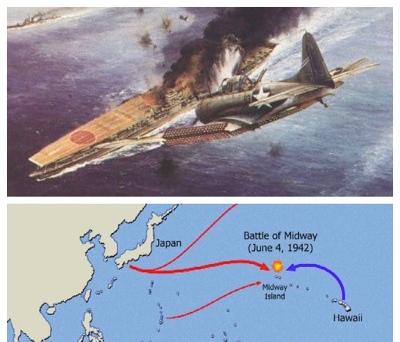 June 4th marks the beginning of the 78th anniversary of the Battle of Midway, the greatest naval battle in American history and the turning point of World War II in the Pacific. At Midway, a larger Japanese fleet was surprised and defeated by smaller, less combat-experienced U.S. naval forces. Victory was enabled by:

The application of “Teamwork, Tone, Tenacity™” (T3) enabled the success of American war planning, fighting and winning at Midway and they are just as applicable today as they were in 1942.

At the outbreak of World War II, the Japanese Navy seemed unstoppable. U.S. military forces were down following Pearl Harbor and a Philippines surrender, but proved they were not out when Lt Col Doolittle’s B-25 bombers conducted a raid on Tokyo and the Navy fought the Japanese to a tactical standoff at Coral Sea in April 1942. Japan’s Fleet Commander, ADM Yamamoto, sought revenge with an attack against Midway by his four carrier task force, believing he could lure and defeat the U.S. Navy’s three central Pacific carriers in a decisive engagement.  While Yamamoto factored tangible numeric advantages into his plans, he did not factor in the U.S. Pacific Fleet’s ability to harness three intangible human elements that resulted in triumph:

After Midway, the Japanese lost their aura of invincibility and the ability to effectively maintain the offensive. There were many random events and miscues that occurred during Midway that some attribute to luck. From my service afloat and ashore in southwest Asia, I’ve found such occurrences are commonplace in battle. What cannot be attributed to luck – when preparation met opportunity – was how “T3” helped break Japanese code and deliver all-source, Operational Intelligence (OPINTEL) which in turn provided a U.S. decision and combat advantage.

According to ENS Mac Showers, who would later rise to the rank of Rear Admiral and was the last surviving member of Layton’s Pacific Fleet Intelligence Staff until his passing in 2012, “[Teamwork] was the origin of OPINTEL. No such systems existed prior to Pearl Harbor. No one told us to do it, or how to do it. Rochefort had the concept, Layton masterminded the execution, and Holmes was the genius who made it all work.”

“T3” lessons were personified at every level during The Battle of Midway.  Thanks to the courageous exploits of those that embodied the American spirit, it will forever be remembered as a history-changing event and benchmark for today’s leaders in peace, crisis and combat.

– Rear Admiral Paul Becker, USN (Ret) led large, diverse, high-performing teams as the former Director for Intelligence of the U.S. Pacific Command in Hawaii and the Joint Chiefs of Staff in the Pentagon.  He founded The Becker T3 Group in 2016, a platform for keynote and inspirational public speaking.